Originally from Kingston Upon Thames in London, David Stephenson has over 15 years experience working in the wood industry along with a life-long passion for working with timber. 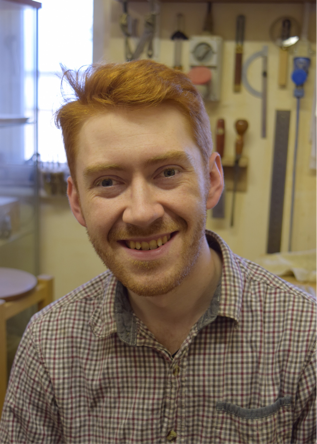 Furniture maker David Stephenson inside his natural habitat... his workshop on the Hampshire/Wiltshire border!
David’s love of woodworking began at an early age and continued through his time in school. At 16, he went straight into a joinery apprenticeship with an established business in Kingston upon Thames; he also attended The Building Crafts College in London, run by the Worshipful Company of Carpenters. He then spent time in Sussex receiving tuition in furniture making from John Lloyd. At the same time, he gained additional experience by volunteering at the Bluebell Railway carriage and wagon workshops.

In 2008 David began undertaking freelance commissioned work, and in 2009 at the age of 20, he left London and moved down to Weyhill just outside Andover near the Hampshire-Wiltshire border where he achieved his life-long goal of establishing his own furniture workshop and business in the countryside. At this point, David began offering restoration services as well as commissioned design and manufacture. As time has passed, the focus has moved away from restoration and David's time is now spent focusing on designing and making furniture, and by teaching and tuition.

In late 2016 after 2 years of tweaking and development David began launching a micro brand called Stable Furniture. The concept of Stable Furniture is the production of a small, standardised range of simple, sustainable and affordable furniture to encourage more people to buy local, handmade work which will last a lifetime, rather than the cheap ‘fast furniture’ mass produced in vast quantities which lasts only a few years. Stable furniture is available direct from the workshop and online.

David is also extremely passionate about encouraging people to experience the joys of working with wood: by working with local schools, he has given young students including those with additional needs the opportunity to gain hands on work experience in his workshop. This has proved to be extremely enjoyable and lead to the introduction in 2015 of inclusive private one-to-one weekend tuition and courses for beginners and hobbyists.

In 2019, the popularity of David’s courses significantly increased with the introduction of standardised (but still flexible) one-, two- and three-day courses. Since then, the range of courses has expanded and now includes taster days, furniture joinery, and Roubo-work bench making courses.

2019 also marked David’s his tenth year in business, with a continuing reputation for high quality work and personal customer service with private and commercial clients both from the local Hampshire, Wiltshire and Berkshire areas and across the UK.

2021 has already led to new advances for David. He has been contracted to deliver a City and Guilds Level 1 course in Carpentry and Joinery to a school leaver with additional needs. He is also working with Emmaus to deliver skills courses to their Winchester-based companions in order to support their social enterprise model.